Recently you should have certainly see the pictures made by the space artist Jason Davis. The planetary society has highlited him in an article : http://www.planetary.org/blogs/jason-davis/20130626-earths-skies-saturns-rings.html

Beautiful isn’it ? But not realistic. What a shame…

I’m saying that because rings around the earth is my investigation field of search since years. I have made my Master Diploma with that. And I have gone more farther than just copy and paste Saturn’s rings around the Earth. I have made original rings for our planet, with different gaps, different structure, and yet, different color and materials (only rocks, no ice).

Anyway, on the plan of the size, they are quite the same (from the inner ring to the outer), and so, the way the Earth could look like is quite the same as Saturn.

In the article linked above, there are views from the ground, showing how the rings should looks like in the sky. I am sorry to say that, but most of the views are considerabily wrong ! They are aestethics, but wrong on a scientific point of view. Disambiguation, image by image (follow with the image on the planetary society blog).

This image shows the rings from Washington D.C. The location of this is 38,53° North. I’ve just opened Celestia, where the Earth circled with my own Rings are, looked for the Capital of the USA, landed on the ground, and saw the sky. It looks like this : 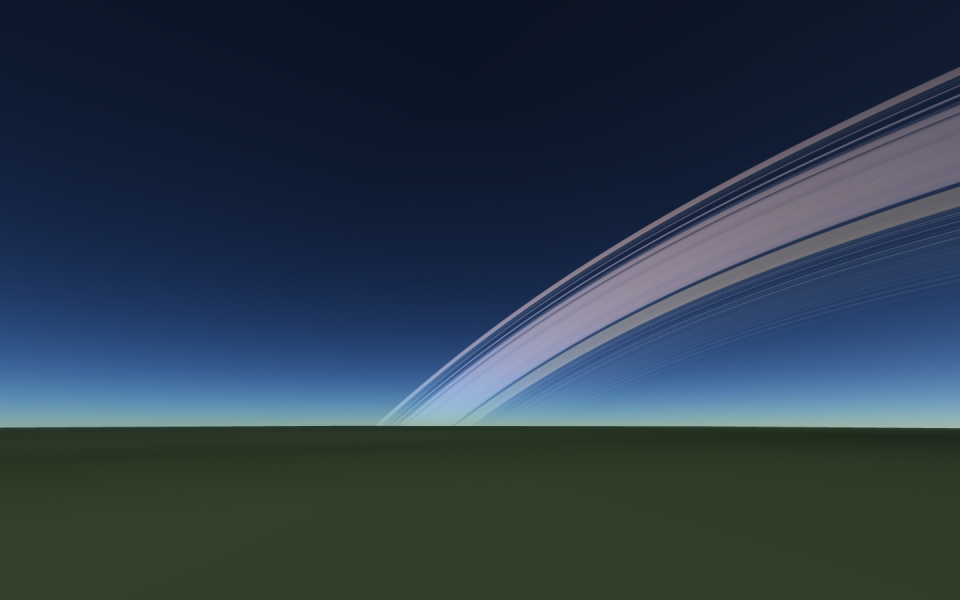 You see ? It’s way more less CURLY and the inner rings are higher in the sky. There is just one thing that is wrong on my image : the illumination of the Rings. In the image of Jason, the Sun is about to rise, just near the rings. With this kind of configuration, they are lit by behind. So, what we should see is the dark side of these rings, and not the bright side.

The rings seen from Guatemala. Also wrong. From this country, they are much more higher in the sky, and thiner. The effect of the perspective is stronger. Also, same thing as the first image about illumination : the position of the Sun suggest an illumination from BEHIND the rings. 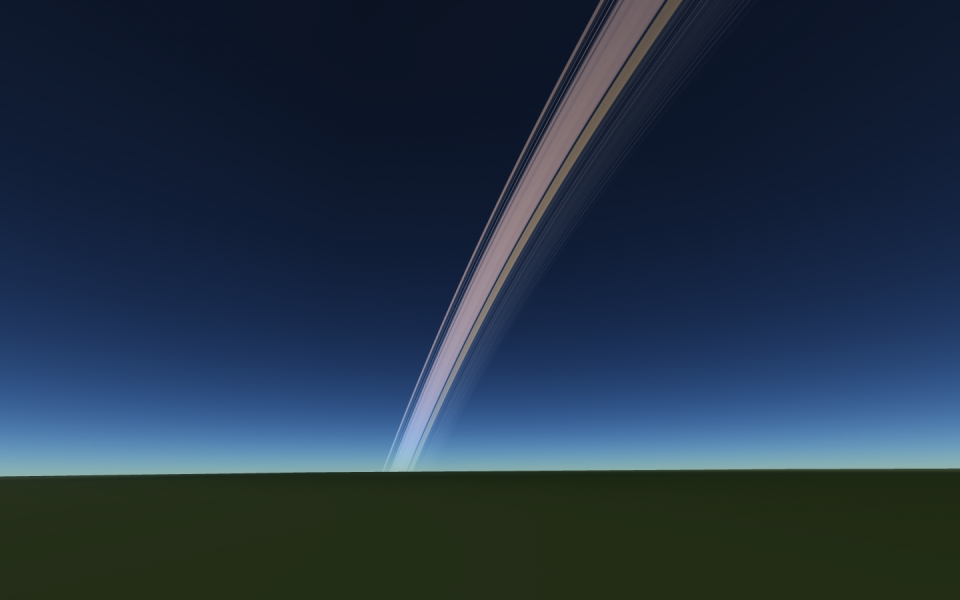 Nothing really wrong here. I think this the only image to be kinda good.

Back to some more wrongness. The artist is showing the thin line of the rings eclipsing the Sun during the Equinoxe, at the Equator line. Scuse me but, how such a thin structure, only a few meters, maybe a tens, can cast such a shadow on Earth ?

Here is how this should be : 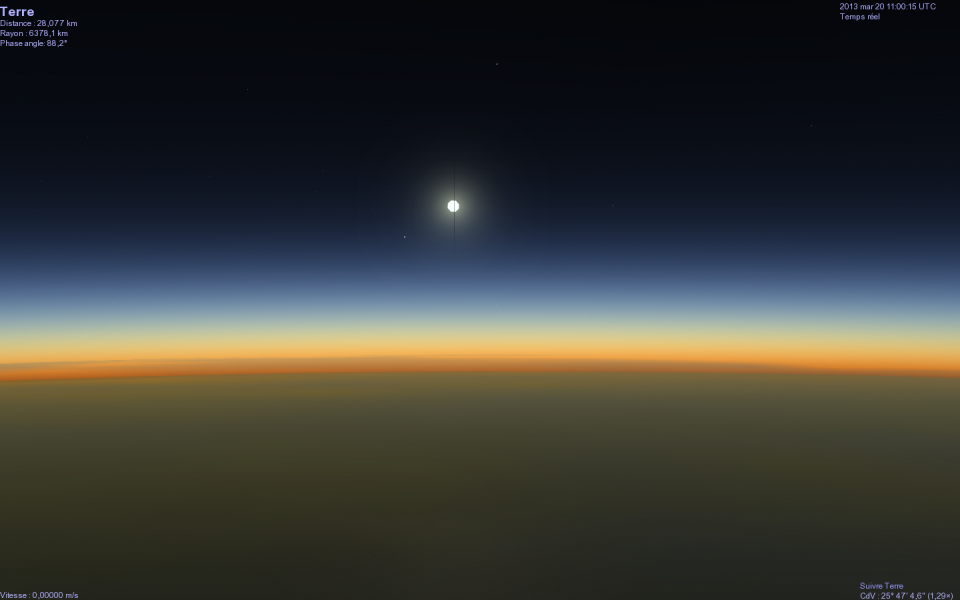 You see ? No shadow. Not even a darkening of the ground. Also, in this sky, the rings should totally disapear, even if we are not on the Equator line. Why ? Because the Sun light would be striclty parallel to the Rings plane. So, no light on them. The only possible light should be the Earth illumination. Also, on the Equator line, at this moment of the year, the only way to see the Rings should be to look at the Sun through a telescope with a powerful solar filter. And maybe you could see a very thin dark line crossing the Sun disk.

This is probably the wronger image of the page.

It’s showing the rings as seen from the Capricorn Tropic. Let me explain why this is so wrong. The Capricorn Tropic is located at 24° South. This is the line of the Earth where the Sun is at the Zenith during the southe Summer Solstice day.

The view is showing the rings in a LARGE porition, in a frontal view. And the shadow of the Earth, at the middle of the night.

Celestia is not in phase with this : 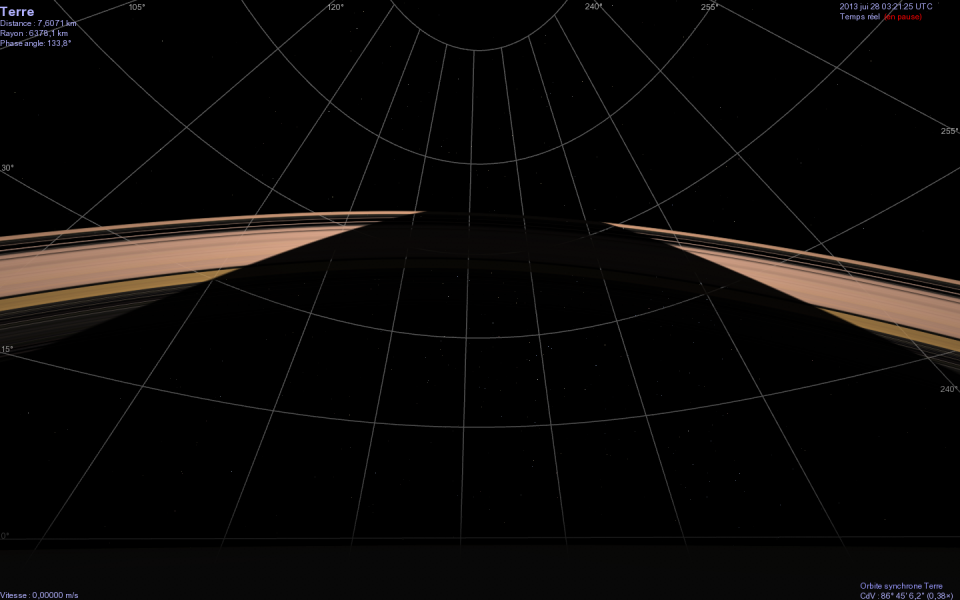 The rings are HIGHER in the sky. Thiner, and the inner rings are not hidden by the horizon. How could this be possible to imagine that the rings should look like they are seen from higher latitude ? Also, the Earth’s shadow is also wrong. It cut the rings in TWO part. There is no remaining unshadowed part, even at the highest position of the Sun during the Summer or Winter Solstice. And to finish, have a look on the FOV of my Celestia screenshot : 86° ! And the Rings wont fit in it. Actually, they should go East from West horizon, and occupy an area about 140° wide in the sky, and 50° high in the sky, which is way different than the Jason Davis rendering.

I have to make this disambiguation article because working about rings around the Earth is my work since many many years. And I’m going more farther than sky sightings, and also plunge deep is Astronomy History, explain how the Rings are formed, how they have impacted the Eart climate and the Sea level. This is a work in progress, and this will be the work of my life.